What is co-sleeping vs. Bed-sharing/Family Bed?

Co-sleeping is a practice in which babies and young children sleep close to one or both parents, as opposed to in a separate room.

Bed-sharing consists of Parent(s) sleeping in the same bed with the child.

One of the decisions many have to make in Western countries, is whether or not to sleep with our babies. It is a loaded issue and a controversial one.  Opinions are often black and white and rarely discussed are the multiple shades of grey that exist for sleep options.  At my quarterly childbirth education series, it is a discussion that is guaranteed to cause discomfort among attendees because they’re not sure on which side of the line they stand.  Do they bed share?  Do they get a co-sleeper?  Does their baby sleep swaddled?  Does their baby have their own room? It’s important to know and understand the issues and then begin to make a more educated decision about how you’ll best sleep with your new family member. 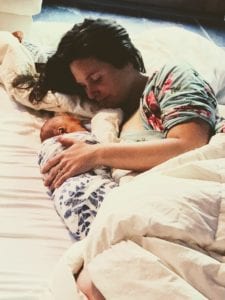 Everyone knows, newborns want to be held.  So many new parents tell me in our initial postpartum visit, “He doesn’t sleep unless he’s on me”.  “She wakes up the moment I put her down”  Babies are strongly opinionated about sleeping with their moms.  They’re contact- seekers. Dr. James McKenna, an anthropologist at Notre Dame who has been studying infant sleep for 40 years, states “This is what’s good for their physiology. This is what their survival depends on.”

Humans have been sleeping with their babies for 200,000  years.  The practice of co-sleeping is still widely practiced throughout the world.  Studies show that 40 percent of all documented cultures bed share, going as far as calling it cruel to separate a mom and baby at night.  In one study, when Mayan moms in Guatemala heard that American babies sleep away from their moms at night, they responded with pity.  One mother asked “But there’s someone else with them there, isn’t there?”

Balinese babies are generally held almost every moment-day and night.

In Japan, babies sleep between their parents, a practice referred to as Kawa no ji—the character for river—川 —the shorter line representing the baby and the longer lines, her parents.

However, in Western cultures, we’ve been separating moms and babies at night for a long time. By the 10th century, bed sharing was banned by the Catholics to prevent the poor from intentionally suffocating infants whom they didn’t have the resources to care for.  Mothers were threatened excommunication for sleeping with their infants by the mid 1500s.

Our own American Academy of Pediatrics is opposed to bed-sharing: It “should be avoided at all times with a full term normal weight infant younger than 4 months”  The organization claims the practice puts babies at risk for sleep related deaths, including SIDS.

However, despite these statistics, parents are bringing back the Family Bed.  Bed sharing creates a closeness that we all crave, as well as an ease of feeding and most importantly, improved sleep for everyone involved.

Dr James McKenna found that when breastfeeding is done in bed, mom creates a little shell around her baby, bringing her knees up just enough to touch the baby’s feet.  Inside the little shell, baby’s heart rates regulate, usually slowing down.  Baby’s also hear their mom’s breathing which is a familiar sound from the womb.  (This is why so many cultures use a “swooshing” sound to soothe a crying baby!)

Contrary to new parents concerns, breastfed babies don’t move all over the bed.  They’re too busy staring at their mother’s breast almost all night.  Even babies in bassinets in the same room will turn their faces to their mom for most of the night. 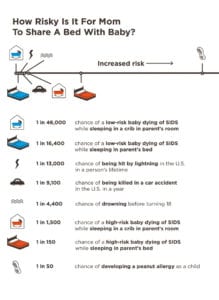 Wouldn’t it seem more prudent for American Academy of Pediatrics to begin instead, talking about safer bed-sharing?  It could take a lot of the steam out of the controversy.  Many of my  new parent clients are frightened of admitting to sleeping with their babies for fear of being reprimanded by their pediatricians!  Better information about SIDS, why and when it happens, as well as safe bed-sharing tips and suggestions would be a less judgmental and more tolerant way to honor families choices about sleep.

What has been found be most relevant when relating to bed sharing, is that the incidence of SIDS does substantially increase when the baby is 1. low birth weight, 2. sleeping next to a parent who has been drinking or taking drugs, and 3. when falling asleep on the sofa.

All bed sharing is not the same.  Risk is different in different families.   Approaching sleep with new families could be tailored for each family and their circumstances.  A baby with low birth weight or whose parents are altered by drugs or alcohol is at a significantly higher risk of SIDS (1 in 1500)  If these same parents bed share, the risk increases to 1 in about 150.

A baby who has a healthy birth weight, whose parents don’t smoke or drink have a very small chance of SIDS-about 1 in 46,000.  That same family bed-sharing has an increase of .004 percentage points for SIDS.   This baby is more likely to get struck by lightning in her lifetime than die of SIDS!

For many, the perceived risks outweigh the benefits.  They can’t sleep because of stress related to lying over their babies.  Some talk about the sounds their babies make while sleeping, or between sleep cycles, and can’t sleep through these little grunts and groans.  Bed sharing isn’t for all parents.  The most important thing is to find a way to get sleep, for baby to thrive breastfeeding, and for everyone to feel relaxed, confident and comfortable with their choices.

If you have questions about bed sharing, or want to know more, please visit Dr. James McKenna’s guidelines for co-sleeping

For more information on the subject, visit kellymom.com

What is co-sleeping vs. Bed-sharing/Family Bed? Co-sleeping is a practice in which babies and young children sleep close to one or both parents, as opposed to in a separate room. Bed-sharing consists of Parent(s) sleeping in the same bed with the child. One of the decisions many have to make in Western countries, is whether […]

What does EDD Mean? EDD, or Estimated Due Date is a calculation made based on Naegele’s rule—which assumes you have a 28 day cycle and regularly ovulate on the 14th day of that cycle.  To calculate your EDD, add 7 days to the first day of your last period, then count forward 9 months or […]

I’ve recently been doing a lot of postpartum doula work.  Both a confirmation and a reassurance in the work we’re doing prenatally—Informing and instructing our clients in the importance of resting for the first 40 days.  Teaching that this is not only a good thing, but fundamentally the right thing and what our bodies intuitively […]